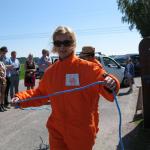 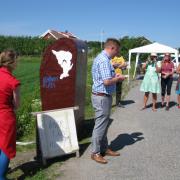 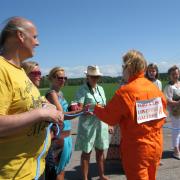 Third grade at Råde primary school had the workshop "We make sounds".

Artists participating in this exhibit:

I am driving slowly through the forest with a rolled-down window, absorbing the details. Dark vertical closely spaced trunks, prickly crooked branches interspersed with tiny flashes of light, soft mossy ground, a smell of soil and half rotten leaves. I draw it all in. Accumulate.
The light changes, the landscape opens, the horizon makes my eyes water. I force them wide open, note how the clouds rapidly drift, the grass surge and bow flat on the ground. Filling my lungs to bursting point-

I'm creating a fictitious house in Fredrikstad, by combining descriptions of two houses in two different rural places in western Sweden. These two places are forming the shape of triangle together with Fredrikstad.

A man is describing a house in Skillingsfors, Värmland - a big old farmhouse with portraits of the former inhabitants on the walls in the dining room with it's painted ceiling and iron stove. The portraits are looking at you, with the kind of eyes that tell you to do better! The house has been in the man's family for hundreds of years, and after a period of complex ownership and tension, the farmhouse is now taken care of by one of the relatives.

A woman is describing a house in Hedekas, Bohuslän. It's an old house where the woman spent one summer with her parents who invested a lot of dreams and hopes in this house. But, of that came nothing. Instead that house became a symbol of failure and disappointment in her family.

Combining these two descriptions I am creating a third house in Fredrikstad, a house that is floating in a dreamworld - free from guilt, conflicts and crashed dreams.

Grammatically speaking, the term 'past imperfect' refers to an action that was in progress at a particular time in the past, as opposed to an action that had been completed. In English it is often called the continuous past.

Past imperfect calls for an echo from our incomplete past. Here, in the passing of cars, moments, and histories, the imperfect conglomeration of voices calls out and rides the airwaves, hoping for an echo from passers-by who are still to come. "When I'm calling you, will you answer too?" Past Imperfect is a perpetual call whose crescendo can only be felt in retrospect.
http://yvettepoorter.weebly.com 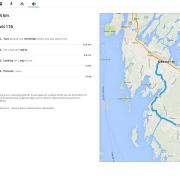 During an artist resdency in Senegalese capital Dakar in 2010, we were awoken each morning at around 5 am by the curiously regular and repetitive chirping of a local bird, known as the alarm bell. We lay awake listening to the rumble of the city as it gradually came to life, other birds, miles and miles of frustrated-commuters sounded their horns in the early morning rush hour.

Mad Cow Disease
I used to live in England when the cows got sick. They killed them in herds. They shot them, one by one. And afterwards they collected them in piles on the field and burned them. My clothes smelled of sulfur that winter.

Poisoned Sea Blues
There are floating islands of garbage in the sea. Some of them big as countries. They're food supply for the fish. Plastic residues find its way into the fish body. Just before we drag them up from the deep blue, gut it, wash it clean, boil it white, and serve, neatly sliced pieces, for our children.

The Struggle
A lifeline is never straight. It's bending in waves, in curves. You choose your direction, you believe you've found the secure path. And then the landscape opens up. Widely. And you don't know where you are.

My work with sound spans from sculptural installations and concerts, to purely sound-based works.

structures. The piece shown as part of Lydkunst via Drive In is an example of the latter, where

several field recordings and a guitar form the basis of a composition.

How to maintain the tension of equalization in a mix? The level of things in order to maintain identities foregoing a holistic integrated fix. Equalization settings are unique, re-using a previously constituted setting denies definition to speak; the feels, modalities and resonances of a new situation. A record of a situation of improvised collectivity as a platform on which to be-with is in fact a being-with by being-over. Is it possible to learn how to be-with solely by rehearsing being-over? How can we perform in a way transposing the being-over closer to the being-with through an equalization of being-under's requiring a reconsideration of how one could be-over at all?

Listening to the sweet sadness of a Russian romance floating over the little travelled roads and cornfields of southern Norway on a summer day, mixing with a birds song, the humming of a bee or the platter of rain, creates a shear and insurmountable longing, gracefully counter-acted by the mundane drive-in sound station indiscriminately streaming the aria to passing cars and tractors, trucks, clouds of dust - or the curious stopper-by.

– Amid the Din of the Ball, Op. 38, No.3.
Music by P.Tchaikovsky, text A. Tolstoy, sung by the soprano Makvala Kasrashvili, accompanied by pianist Liya Mogilevskaya, lyrics translated by Martin Preston.

Amid the din of the ball,
In the tumult of everyday bustle,
I chanced to see you, but a secret
Veiled your features;
Only your eyes looked on sadly,
But your voice sounded so divine,
Like the sound of a distant pipe,
Like the sea’s playful wave.

I loved your slender figure,
And your pensive look,
And your laughter, at once sad and vibrant,
Has been ringing in my heart since then.
When, in the lonely hours of the night,
I am weary and would lie down to rest,
I see your sad eyes,
And hear your happy voice.

Then, sadly, so sadly, I sink into sleep,
A sleep of dreams beyond recall.
I do not know whether I love you
But I believe that I do.

The infinite number of artworks


Despite attempts by institutional critique, and its disciples, to demythify arts infrastructural and institutional procedures contemporary art remains wrapped in the popular imagination in codes and conspiracy theories: and the elevation of one artist or work over another considered an outcome of those codes and conspiracies. Why else would singular artworks standout in a realm of oversupply. The author of this work deadpan about the sheer volume of artworks in circulation and their similitude. In a voiceover worthy of "1984", "2001: a space odyssey" or "Alphaville" they hint at a Marxian reading of the whole system - if all works are the same (just another number) some sort of fetishization or mythification has to be taking place to individuate, differentiate or over-value this or that "art work number 000001".

All sounds is a presence, a touch.

Marianne Stranger is creating a piece based on the intimate sound of the moving thoughts.

Inspired by the hectic highways, restlessness, secret pathways, to-do-lists, doubts, movie carchase, road demolition, self-trouble shooting, caravans with motion and other place-escaping passages, she is searching the moving sound of the mind.

As a filmatic view on intimacy/privacy, she will explore the surreal connection between the the clear voyantesque atmosphares created in the inner and nonsense bullshit of emphtyness-questioning if what stays is of importance, what disturbs for a thrill and what just creates a humming sound to ease your mind.

Can you hear the clouds drifting by?

Listen to the sounds around you.
Can you hear five different sounds present right now?

Listen to the sounds around you.
What is the quietest sound you can hear now?

Listen to the sounds around you.
Which sound is farthest away?

Listen to the sounds around you.
Which sound did you hear as the first in the morning?

We are making sounds

"We are making sounds"

The children collaborated on a sound project during the spring months. First the body was the center: what sounds can we hear and make? Next we were exploring the idea of echo and how to make it without the help from the space around.

This soundpiece is based upon Torp & Liseth own poems and a channeled recording with Kari Hanne Nyland. The channeling came through during a spiritual session we had together. It expresses the sound of Mother Earth, and that she almost died. This is a wounded earth talking. In this recording she shows her gratefullness to us for connecting with her and of being alive. Length: 05.51 min. Music and sound: Torp & Liseth, Kari Hanne Nyland.

Sounds Of Mother Earth is part of what we call the Cosmic Broadcasts series of sound and videoworks exploring the universe of people connecting on a mulitidimentional level through a spiritual practice.